The expert vs. the experienced learner…

Let's say you're about to teach something to an audience. You step on the stage. And in that moment, you have to determine your tone. Will the tone be of an expert who's there to articulate and share information that ought to be trusted because of your experience and expertise? Or will you be an experienced learner, just a few feet in front of your audience, on the same journey?

How does that work?

And a whole bunch of hands go up, and maybe you raised your hand. Then the teacher calls on a student and the student says, “Train” or “Plane,” whatever you want. “Plane.” And the teacher says, “Right.”

What happens in that moment?

And the moment someone over there is told they're right, you presume that you're wrong. Your arm comes down and you stop thinking about the question entirely.

Now, there are some problems that have a very specific answer, right? What is two plus two? It's four. I mean, if we're talking about arithmetic the way we understand it, two plus two in base ten is four. But imagine if someone says, “What's ten plus four?” Well, ten plus four in the normal way we think about things is 14.

But ten plus four in base 12, like our clocks, if you say four hours after ten, what do you get? You get two. Ten plus four equals two. Now that's a second answer.

For the majority of the things we think about and talk about, there are multiple right answers.

It's a legitimate answer in a different context.

It shuts everybody else down.

It closes off brains. It closes off thinking, because we think, “Well, if that's the right answer, my answer must be wrong.”

The crazy thing is that, for the majority of the things we think about and talk about, there are multiple right answers.

The fastest way to get the crowd to disconnect

When you get on stage and you articulate the, “This is the answer, this is what I've done and it worked and I'm telling you this,” most of the people in the audience won't actually learn from you.

Instead, and especially if you really did some amazing things, they will come away with something different. They will actually determine that they are not you. And that's a pretty big difference.

When you get on stage and you say, “I've been doing this for 20 years,” it's likely that the audience there will say, “Well, I haven't so I'm not you.”

Or “I'm going to show you exactly how you can accomplish A, B and C because I've done it” and they think, “But I'm not you. You've just proven I'm not you.”

And what happens? We close our minds. We stop listening because we've checked out, because we're already clear we're not you.

If you want to engage an audience, if you want your message to stick, then to move from the posture or the tone of an expert to an experienced learner suggests you're a learner, you're trying to figure things out, I'm a learner, I just happened to be a little bit more experienced. I just happen to be five feet in front of you, on the same journey.

And as I share my story in that context, as I share insights in that context, I just happen to be a little further ahead, which causes you to start wondering and asking, “Well, what happens if I get to here?” Or, “Will I experience that?” Or, “How did you get past that so that I can get past it?”

Notice what's happened. My brain is firing with questions. I haven't shut down. And that has everything to do with your posture when you get on stage.

This isn't about specific words

I'm talking about your tone.

I'm talking about whether or not people experienced you as someone's who's on the same journey as them, someone who's like them, or whether they experience you as a unique expert with so much experience that it's a disconnect from who they are.

If there's a disconnect, they won't learn from you.

Be every person in the audience

The question you've got to ask yourself when you go up to present is, how do you want your audience to interact?

Here's a consultant who is talking about farts. Seriously. But the story is fantastic and his point on being vulnerable is on point! 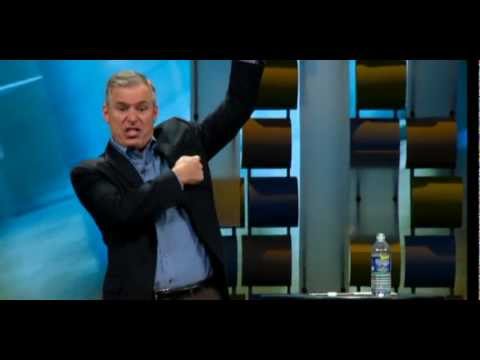 Show people more of the map

My recommendation, from a tonal perspective, is that you go up as an experienced learner, sharing as a guide, if you will, as a guide sharing a little more of the map.

You can imagine that every audience member has a map. They've sketched out a part of their map. Unfortunately, they have a big map and only one part of it has been defined. On the part they've experienced has been defined.

All you want to do, if you do your job well, all you want to do is show them or expose them to more parts of the map, by explaining, “Look, you're going to get here and when you see this, you're going to notice all these things and I'm going to walk you through and help you navigate, because I'm just a little further ahead but I want you to see that part, I want you to discover that part of your map so that you can move forward and progress to the next steps.” If you do that, there's a strong likelihood that your message will stick.

Most of us learned what we know by way of mistakes

Maybe that's the simplest way to say what I want to say. Instead of acting like you were born knowing all that you do, approach the stage with the sense that you're there to share insights that were hard-won. Won by making mistakes. Mistakes that now others don't need to make.