Remember the rule of thirds!

The photographer who took this shot knows a little something about the rule of thirds. I don't know them, but I know that the boat above isn't right in the middle of the picture, where most of us place the important stuff. The only problem with the middle is that it's visually boring. Unfortunately, most of us don't use PowerPoint, we use it's cousin (per spaceman): 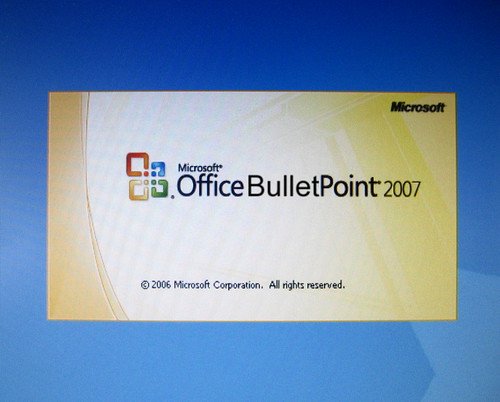 So what do you need to know about visual appeal in presentations?

First, know this -it ‘s never about bullet points. Seriously.

Assuming you know that already, let's get into the rule of thirds.

In essence, it's really about a grid.

Break up your image into three columns and three rows. Now you have a tic-tac-toe grid, right? Great. So place what's important at the intersection of two lines and you're there. Not hard, is it?

That tree, in the image above, is roughly where the first lines of each row and column connect. Roughly. It's not an exact science. But it's clearly more engaging than having the tree be in the middle of the shot.

So if you're taking the photo, use the rule of thirds. And if you're not taking a photo, but you can crop it, then crop it wisely to put the main content in a visually appealing spot.

And if your powerpoint has words on it, then get it in the right spot as well. Feel free not to use PowerPoint's default slide. Create your own text box. I know, get crazy. But the result can look sharp when you put text at one intersection and an image in another, like you see from this slide at PresentationZen. # Public Speaking Tips
Inside This Post
1. Remember the rule of thirds!
1.1. First, know this -it ‘s never about bullet points. Seriously.
1.2. In essence, it's really about a grid.