The Goal of Gutenberg Blocks

When people first started talking about Gutenberg blocks, the idea was that every element in the WordPress editor would be a block. Every paragraph. Every image. Every video. Every single thing would be a block. And with this approach, every block would have it's own controls – so you could change the width, color or alignment of everything easily.

It was and continues to be an amazing goal and for the most part, we've gotten there. Gutenberg blocks and block libraries exist and are available to everyone. People continue to debate if they prefer the new editor to the classic editor, but what you can't debate is that the new editor makes it easy to create modern layouts that match what people are doing all over the web. The other benefit is that we're closer than ever to a “what you see if what you get” between the editor and the final product.

The Challenge of Gutenberg Blocks

Now that we're in the Gutenberg era of WordPress, the challenge isn't getting a block editor. It's that there are so many Gutenberg blocks. It's crazy how many different libraries there are out there. On top of that, every major plugin has also created their own block to support whatever user experience their product delivers.

As a result, in one recent test, I was able to install enough block libraries to have more than 8 testimonial blocks. My problem? Not knowing which one I used on the last page I created. As a result, I ended up using two different ones that had two different sets of controls and CSS classes to stylize.

But that's not the biggest challenge. The biggest challenge, by far, is that every element in the WordPress editor is a block. Every paragraph. Every image. Every video. Every single thing. Yes, the power of blocks is also the challenge that comes with blocks. Because now, to create anything, I need to assemble lots of different blocks to work together.

The Evolution of Gutenberg Blocks

When you talk to the folks “on the inside,” you know, the people who are building these blocks and block libraries, you hear them talking about a future where this challenge of assembling blocks together into a reusable pattern will be eliminated. The future will allow us to design assemblies of blocks into patterns that can be used to assemble pages. This is the future that people have been thinking about for a while. It's the future that has caused some people to hazard the guess that page builders (and themes) won't be needed in WordPress' future.

The future of Gutenberg blocks is patterns. Assembly of several blocks together to create beautiful layouts.

I don't know if you've seen Qubely yet, from the team at Themeum, but let's just say they've done some incredible work to bring that future to today. They've taken a different approach to Gutenberg blocks in that they've already started working on patterns and gone even further. Their Pro product not only delivers 150 different sections (or custom row templates), but they've even created what they call Starter Packs. These packs create full page layouts, and come with multiple pages, so that a full site can be created in no time.

It's all the benefits of Gutenberg Blocks, but even better. Here's a quick walk-thru. 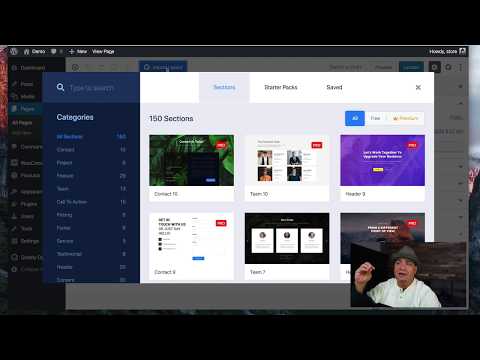 The first time I saw Gutenberg I was confused. I wasn't clear what was getting built or who it was for. Today, when you combine the power of Gutenberg with Qubely, you can easily see how easy and awesome this is for non-technical people to create beautiful pages in WordPress.